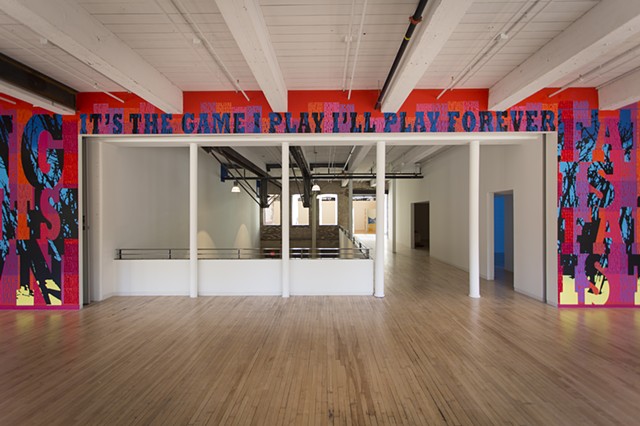 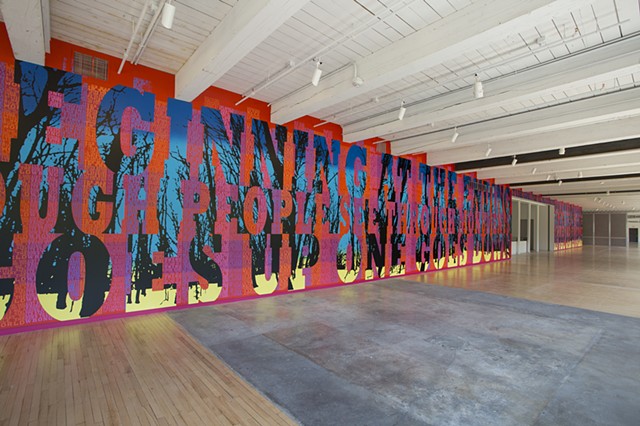 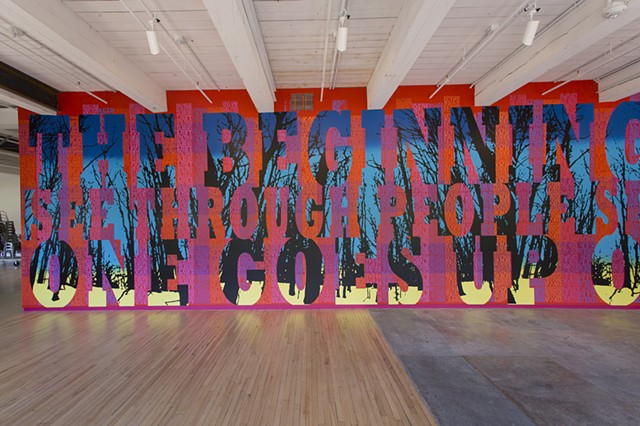 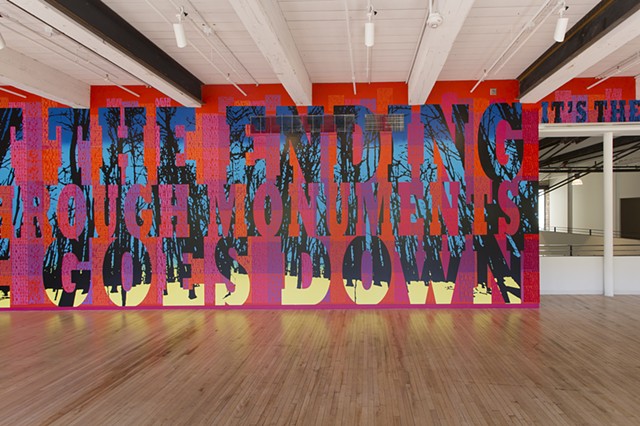 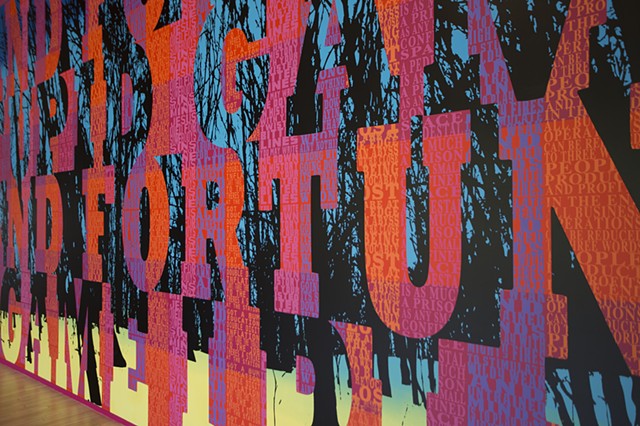 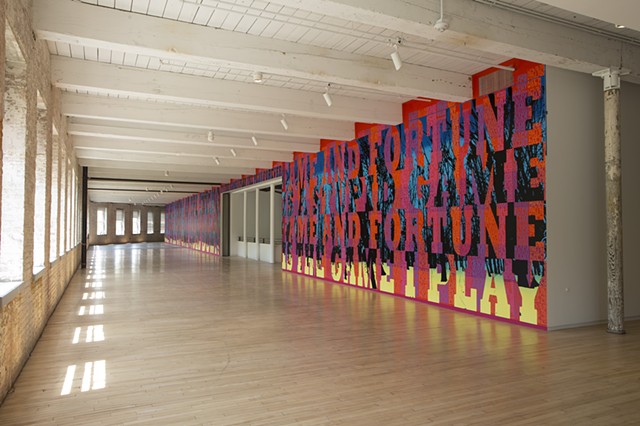 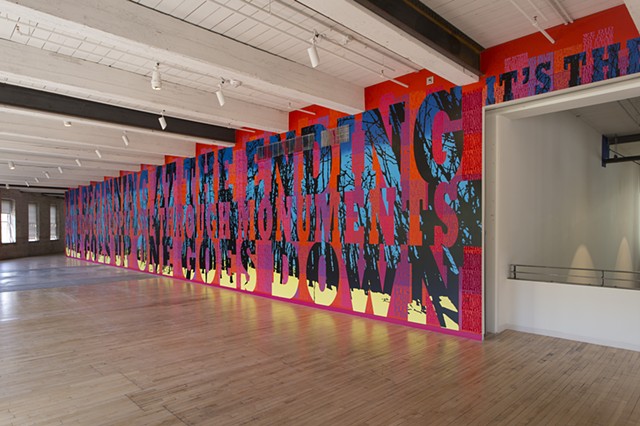 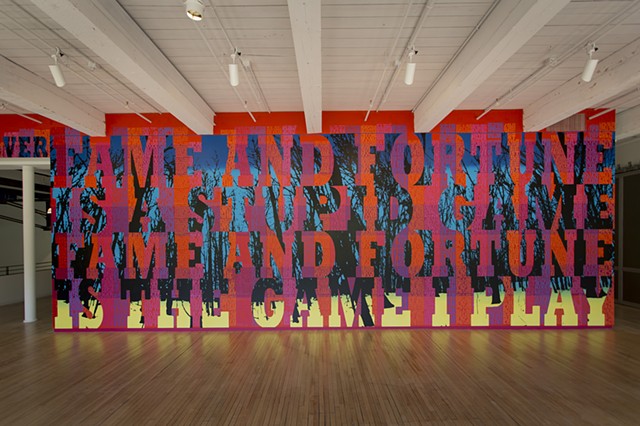 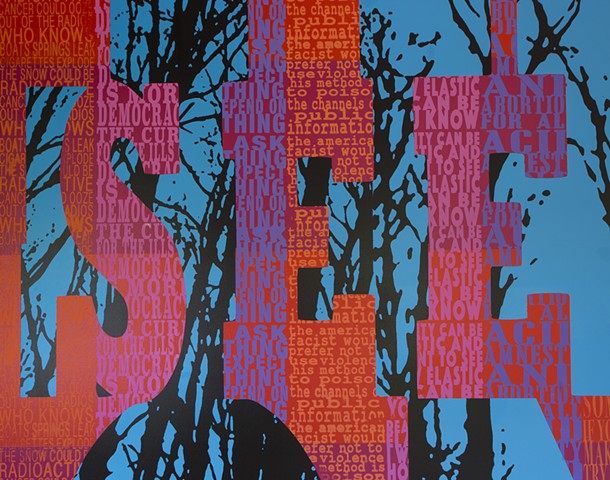 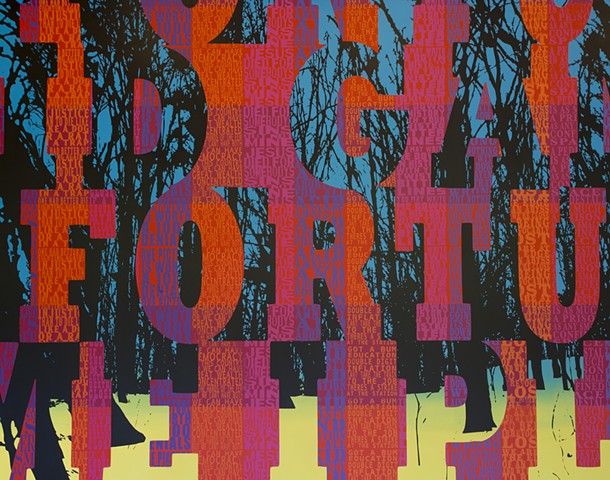 Hello America: 40 Hits from the 50 States

Boston-based artist Joe Wardwell’s Hello America: 40 Hits from the 50 States, a new wall drawing for MASS MoCA, takes inspiration from J.G. Ballard’s 1981 novel Hello America. The book begins after an energy crisis in the late 20th century that leaves America all but abandoned. A century later a group of European explorers finds a radically changed country, a desert landscape parched by the damming of the Bering Strait. The expedition starts in Manhattan and ends in Las Vegas where a tyrannical leader has named himself both Charles Manson and President of the United States. The moment that inspired Wardwell, and seemed like an all-too-eerie nod to our current political climate, comes when “President Manson” grabs the primary protagonist, who is filled with longing for a far-too-distant “American dream” and declares “together, Wayne, we will make America great again!”

The subtitle for Wardwell’s project is inspired by the experimental music group Negativland’s controversial 1991 song “I Still Haven’t Found Snuggles.” The song features a loop of famed “America’s top 40” radio host Casey Kasem as he breaks his usual cheerful veneer while reading a story of a family pet passing away, followed by an up-tempo song from the band U2. The shift in tone provokes Kasem into a string of expletives and rants. Negativland repeats the clip over a sample of U2’s song “I Still Haven’t Found What I’m Looking For,” which becomes the score to an increasingly incoherent rant, exposing Kasem’s base instinct in this behind-the-scenes view of an icon of American culture.

Both of these influences speak to shattered American dreams. With these two sources as his launching point, Wardwell fashions a layered work that looks at America through the lens of landscape imagery, political slogans, and lyrics. The work begins with a silhouetted line of bare winter trees taken from the scenic vistas of the Berkshires. Over this, Wardwell paints a dusky post-apocalyptic landscape of yellows and blues. On top of it all he layers large letters — a slogan camouflaged within the landscape, with lyrics such as punk band Mission of Burma’s “Fame and fortune is a stupid game / Fame and fortune is the game I play.” The final layer is a series of screen-printed texts — 40 texts for the top 40 hits — in repeated vertical bands.

The “40 hits” are culled from a collection of quotes from various American sources ranging from past presidential campaign slogans, to ruminations on the end of the United States, to the role of government and the rules of law. Song lyrics feature works by Jello Biafra, Chuck D, Anne Sexton, Hunter S. Thompson, Abraham Lincoln, William McKinley, Bill Clinton, e.e. cummings, Barack Obama, Henry Rollins, Maya Angelou, and others. In the end, the work is a fragmented portrait in which the larger text, smaller slogans, and landscape function much like the assembled fragments of culture that the explorers in Ballard’s Hello America uncover in their epic journey across the forgotten land.

Major exhibition support is provided by the Horace W. Goldsmith Foundation, the Barr Foundation, and the Mass Cultural Council.